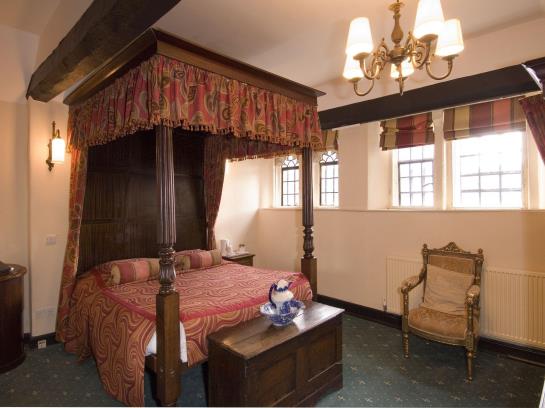 Built in the 1400s, The George and Pilgrim is the oldest purpose-built pub in the South West of England. Situated in the heart of Glastonbury, it is steeped in history and old folk law. The building has a paneled stone frontage, mullion windows, and old oak beams. All 14 rooms feature a TV and tea and coffee-making facilities, and some have impressive draped four-poster beds. Guests are welcome to enjoy an aperitif or traditional ale in the charming Pilgrim’s bar. The hotel also has a comfortable restaurant with an à la carte menu, offering fresh, succulent homemade food. Licensed for Civil Ceremonies, The George & Pilgrim is a popular choice for weddings, holding functions for up to 90 guests and groups are made most welcome. Free on-site parking is also provided. Glastonbury has been inhabited since Neolithic times and today it has more than its fair share of attractions and festivals. There is something to interest most tastes from Glastonbury Abbey that was the site of Edmund Ironside’s coronation as King of England in 1016, museums & churches to the interesting hippie shops selling books, charms, clothes and crystals. Step back in time and prepare to be overwhelmed by the charm of this hotel and the cultural town. Easily accessible to Milllfield, Street, and the city of Bristol, the George and Pilgrim look forward to welcoming you.

Other names for Hotel George & Pilgrims:
Relaxinnz George And Pilgrim